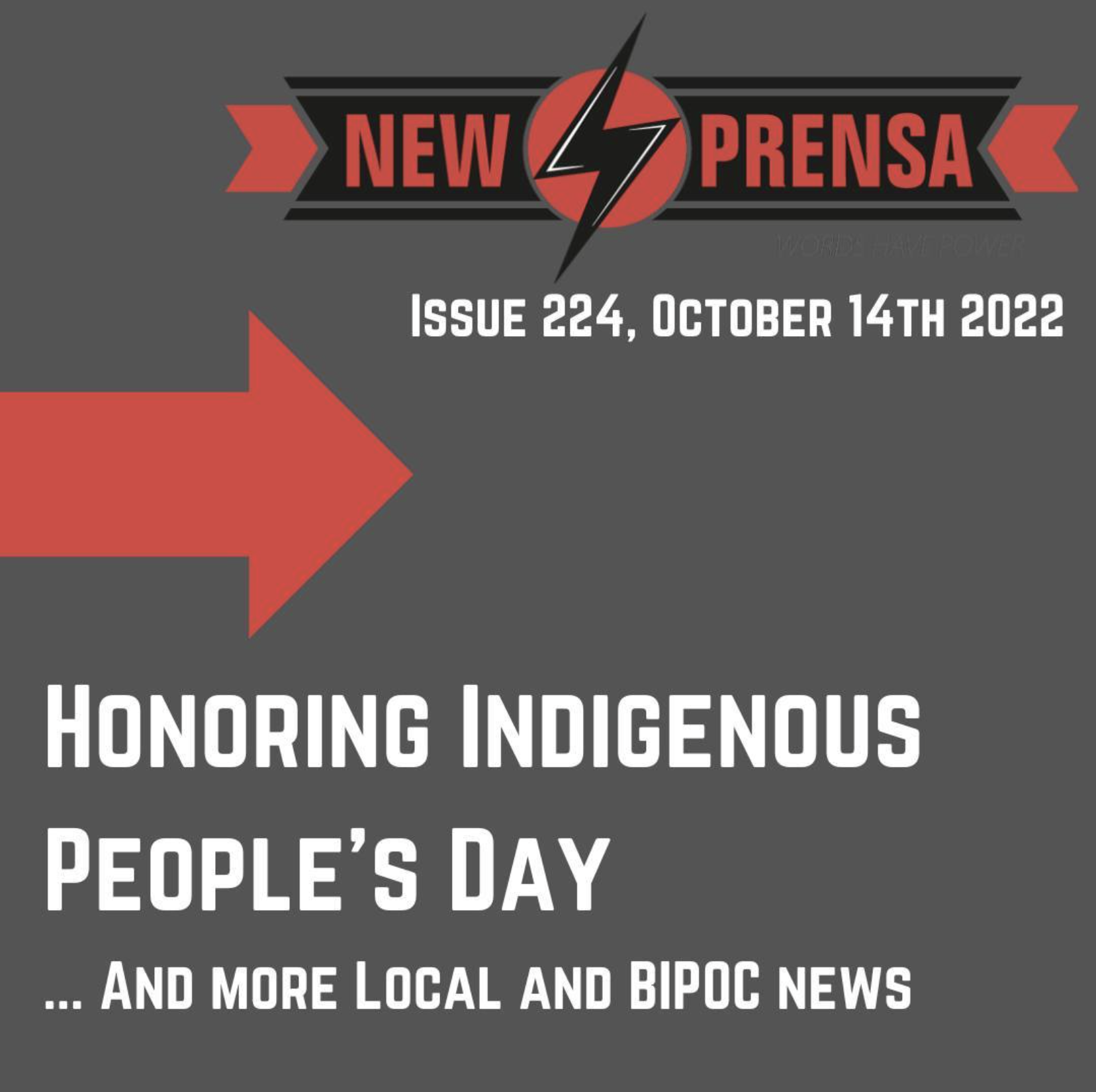 This week’s edition covers stories
from October6th to October 12th, 2022.

Helene here. You may be noticing that today’s edition looks a bit different in your inbox than usual. NewPrensa writers Isabella and Helene are working to freshen up the NewPrensa feel to give you, our readers, the most informative and enjoyable reading experience we can. What does that mean in terms of changes? We’re hoping to include more recommendations for different parts of local culture: food, music, art, you name it. We’re doing away with the Local, BIPOC, and Get Involved, MN categories in favor of a more fluid newsletter each week. We won’t stop highlighting Local and BIPOC news because after all, those things are at the very core of NewPrensa, but we will be adding more to do with local culture and placing a greater emphasis on what’s going on in Minnesota. Dear readers, please do reach out with any comments you have as you read. Things you like? Things you’d like to see changed? Email us at newprensa@newpublica.com. We always love to hear from you.

Some thoughts on Indigenous People’s Day: Monday, October 10th was Indigenous People’s day. The holiday was only commemorated for the first time by a U.S. president in 2021, but its roots go much deeper than that. Certain states (starting with South Dakota, in 1989) have celebrated the holiday in place of Columbus Day since the late 20th Century.

A lot of non-indigenous people, myself included, wonder how they can be better allies. Maybe ideas and perspectives like “LandBack” don’t resonate or don’t seem viable. It’s true that these are difficult, nuanced perspectives that have been met with polarized opinions. Let’s step back and consider some essential ways to be a better ally on Indigenous People’s Day (and every other day). First, please learn whose territory you live on. A Canadian non-profit (Native Land Digital) made an interactive map to find the territories of Native Americans that is very easy to use. In Minnesota, we live on Anishinabewaki, Očhéthi Šakówin, and Bdewakantuwan (Mdewakanton) territories. Current state-recognized tribes in Minnesota include the Ojibwe, Lakota and Dakota Sioux, and Chippewa.

Another way to support indigenous peoples around you is to be aware of political issues that implicate them. In Minnesota, “Stop Line 3” has garnered a large following. Line 3 is a pipeline that’s being built by Canadian oil company Enbridge to pump crude oil from Alberta’s tar sands to Wisconsin for processing.  From Stop Line 3’s website, the pipeline “spans northern Minnesota, crossing the Leech Lake and Fond du Lac Reservations and the l855, 1854 and l842 treaty areas.” Defending treaties is an important way to ensure more just treatment of Native Americans.

Now, in terms of what’s local to the Twin Cities: an event was held at Bde Maka Ska lake by Metropolitan Urban Indian Directors at sunrise on the 10th. Circle gatherings, prayers, songs and smudging were activities part of the beautiful morning ceremony that gave start to a sacred day. That’s all from me.

Some recommendations for Hispanic Heritage month: Isabella here. I was watching Pedro Almodovar’s “Todo sobre mi madre” on Hulu, a Spanish film with Argentinian lead actress Cecilia Roth. The story focuses on her journey to find her dead son’s father. Spanish movies are  suspenseful, dialogues are tense and there’s always somehow an underlying sepia tone to the film.

It got me thinking, when was the last time I saw a Latine film? Well, good thing Cine Latino is coming up next week in the Marcy Holmes neighborhood. If you’re a student the ticket is just 8 dollars, if you’re like the rest of the Twin Cities you have to pay 10 bucks. They will play movies from all over Latin America for a week at the MSP Film Society.  As a proud Argentinian, I’ll be watching “Argentina, 1985” about the trials of the Juntas after the five-year coup that tortured and took the life of many. You can read more about that here.

There’s two new taco restaurants in town and I see no other option than to try them soon. El Sazon, located inside a gas station in Eagan, offers an expansive menu with a variety of birria, shrimp, chicken al pastor, asada, carnitas, and veggie tacos and concha burgers. They recently implemented a brunch menu on Fridays and Saturdays. I don’t know about you, but I scrolled past their instagram page and now I’m extra hungry. Learn more about them here.

Nixta is in Northeast Minneapolis and brings us to their tortilleria and Mexican take out restaurant with a different menu every week! Chef Gustavo Romero shared his recipe for Huauzontles with the Sahan Journal so you can make it at home. The word Nixta (-mal) comes from the term of liming kernels of corn to ground into masa for tacos. This week’s menu includes pollo encacahuatado with Romero’s peanut mole and arroz verde –  a must try! As their motto says, they are “good people making good food.”

That’s all folks! See you next Thursday.