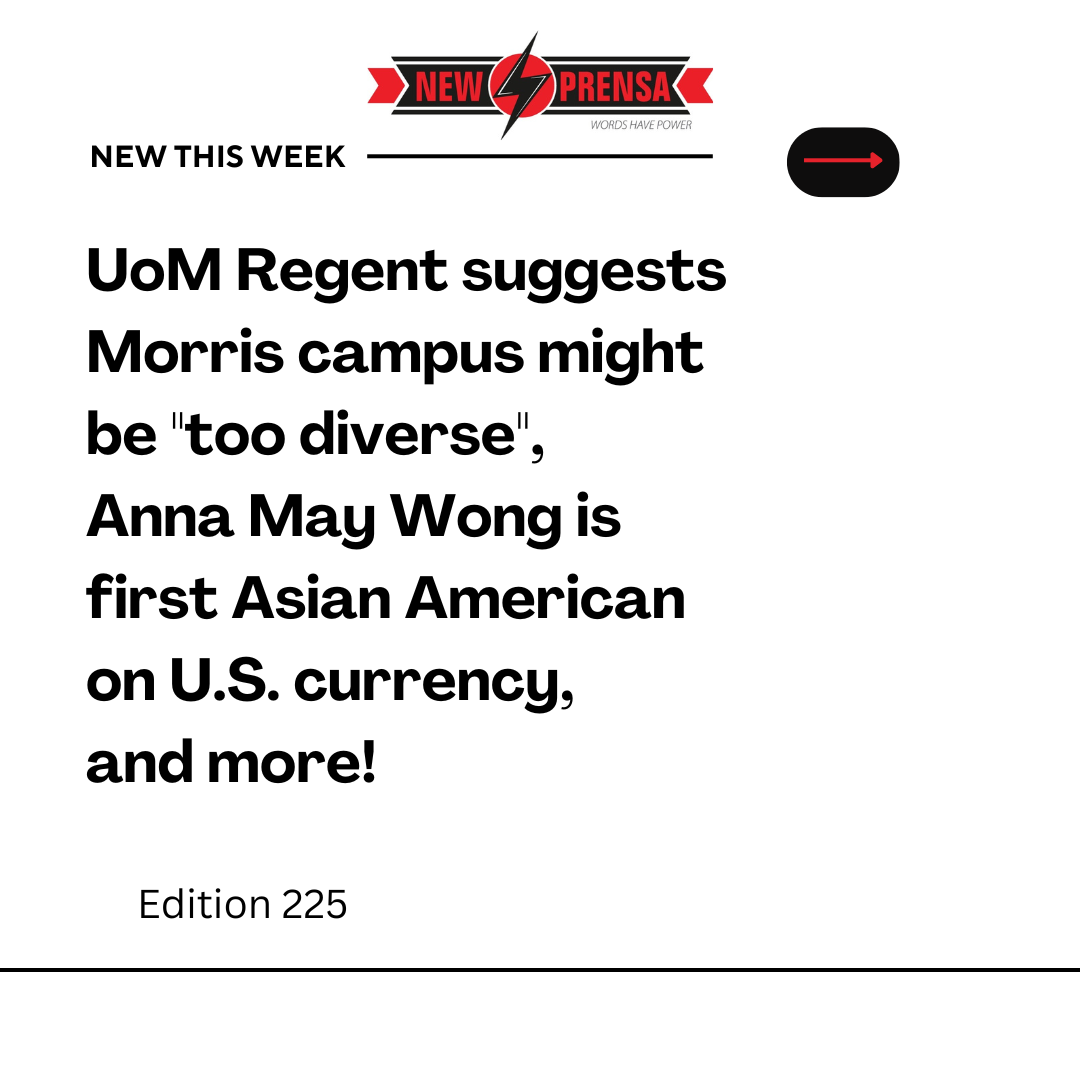 This week’s edition covers stories
from October13th to October 19th, 2022.

Read more on Isabella’s take on University of Minnesota Regent Steve Siggum’s suggestion of Morris campus being perhaps”too diverse”, and Helene’s take on Anna May Wong becoming the first Asian-American on U.S.currency.

Isabella here. I don’t know if Minnesota got the memo, but it’s definitely too early to be this cold, much less snow! I have pulled out my hoodies, scarves and warm jackets to combat the piercing winds as I stride through the streets of Minneapolis. There’s a Japanese proverb that goes something like, “One kind word can warm three winter months.” I’ll stay true to that.

On a local note, University of Minnesota Regent Steve Siggum suggested that the diversity on campus is causing a decline in enrollment at the Morris college in a board meeting, last Thursday. The Morris campus enrollment has declined in the past 22 years. A Regent overviews the financial management of a university. According to the Minnesota Reformer, UoM Morris has seen a 45% drop in enrollment in the last ten years. The campus is partially composed of 31% of Native-American students, compared to other UoM campuses. They also provide an American Indian Tuition Waiver, more on that here. Siggum’s suggestion on Morris being “too diverse” startled many because when you look at the numbers, the disparity between BIPOC students and white students is still significant – on top of that, it’s no good coming from a cis-white man on a college board.

The New Yorker’s cover art this week, “Old Glory”  is quite interesting. A Betsy Ross sewing the American dollar bill. For those who aren’t familiar with U.S. history, she was an upholsterer who sewed the first American flag. Barry Blitt, who designed the cover, reflects on consumerism and the true idol of the U.S. The imagery could illustrate mending the bill and not necessarily making any money, alluding to the current inflation the country is undergoing. What do you think?

On ‘It couldn’t get worse’ this week, rapper Kanye West questioned George Floyd’s cause of death in a recent Drink Champs episode. West posed the idea of Floyd overdosing on Fentanyl at the time he was detained and murdered. Although the podcast has done its job of removing this episode, Floyd’s family decided to file a 250 million dollar defamation lawsuit on behalf of his minor daughter Gianna. Attorneys for the family have considered West’s statements as “harassment, lies, misrepresentation and misappropriation of George Floyd’s legacy.”

On things to look forward to, from Nov. 1 to Nov. 13, you can visit the Minnesota State Capitol’s first ever “Altar de Muertos” (Altar of the Dead), or community altar for the Dia de los Muertos. In collaboration with MCLA and Monica Vega, Flor Soto, and (Neo) Muralismos de México. Register here for the Nov. 1 press conference, Mexican chocolate and pan de Muertos (bread of the Dead).

Helene here! I hope you all had a nice week despite some messed up moments in pop culture. I’m excited that Anna May Wong will become the first Asian American on U.S. currency. She’s one of five women selected to have their face on U.S. quarters in 2022. The other four include astronaut Sally Ride; actress Anna May Wong; suffragist and politician Nina Otero-Warren; and the first female principal chief of the Cherokee Nation, Wilma Mankiller. I’ve never seen one of Anna May Wong’s films. I’ll be watching The Toll of the Sea soon, though, and I hope you will too.

Now, as a college student, I’m really looking forward to the student loan forgiveness that will come soon from the Biden administration. Currently, enrolled students, as well as those who have finished school, are eligible for $10,000 (or up to $20,000 for Pell Grant recipients). If you’re like me and the Department of Education already has your income data, you won’t even need to complete an application. But, for those of you who would like to see your loan forgiveness sooner rather than later and/or the Department of Education doesn’t already have your information, complete this super short application here!

And now, a segue away from money matters. Dua Saleh just released a new album! Do you know their music? Or maybe you know the artist from their role in Sex Education, where they play the show’s first nonbinary character. My favorite from their new album, CROSSOVER, is “fitt”. Their style draws influence from R&B and rap and often transcends just one genre. Give it a listen and write to us to let us know what you think!