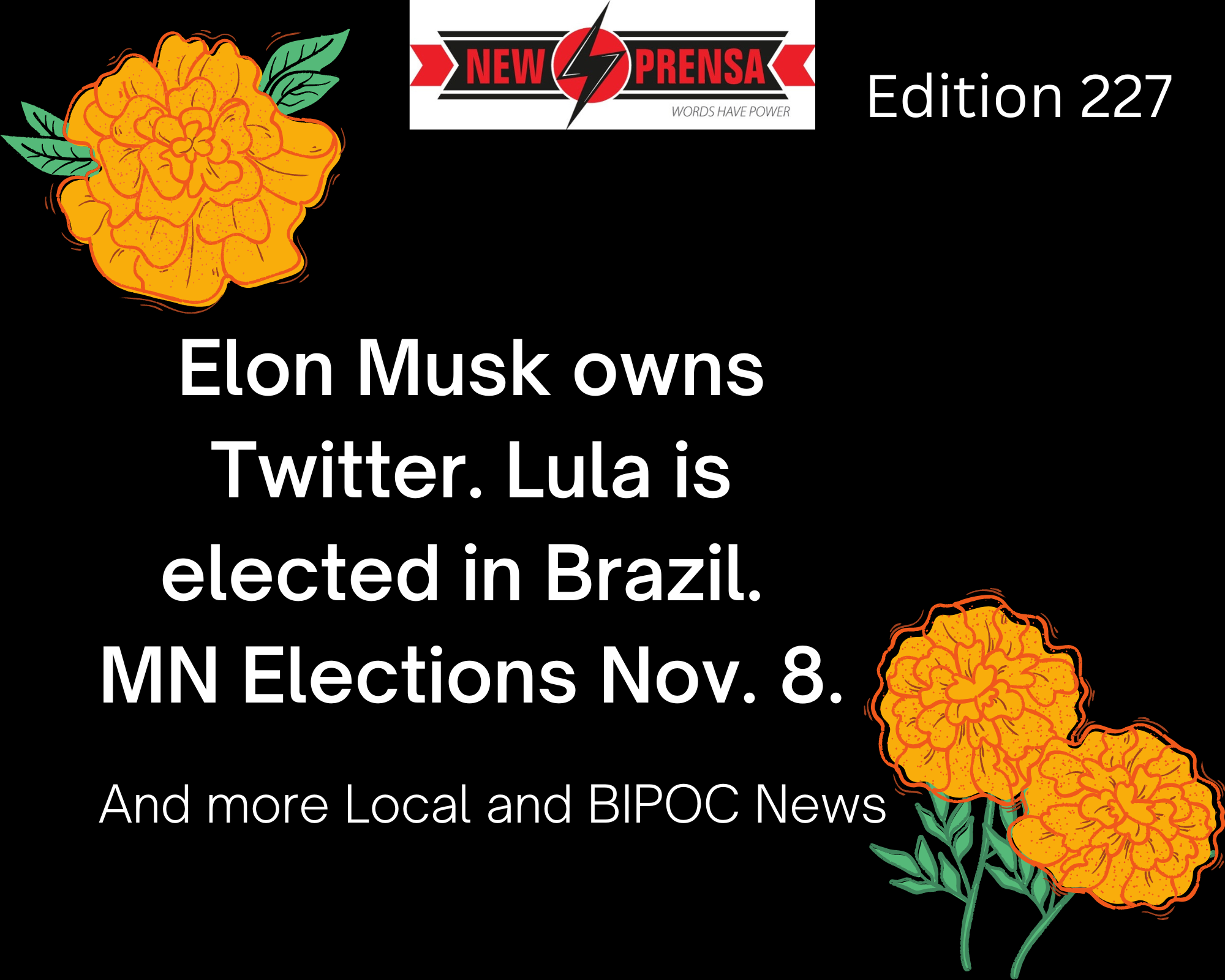 This week’s edition covers stories
from October27th to November 2nd, 2022.

I’m excited to share with you some big news I wrote about this week. The Minnesota state capitol exhibited its first-ever “Dia de los Muertos” (Day of the Dead) altar. (Neo)Muralismos de Mexico (NMM) worked together with artist-altarists Monica Vega and Flor Soto, in collaboration with the Minnesota Council of Latino Affairs (MCLA), and other community members.

I visited the state capitol on Oct. 31, 2022, to view the artists setting up the altar before the big day. We chatted about the importance of an event like this for the Latino community and what it means to them as artists. A press conference was held on Nov. 1, 2022 to present Gov. Tim Waltz’ proclamation of the altar that would mark Latin-Minnesotan history. The event ended with Mexican hot chocolate and “Pan de Muertos” (bread of the dead) offered in the vault.

Everyone attending was filled with joy and excitement. The team accomplished something that hadn’t been done before at the state capitol. To learn more about the artists, continue reading here.

For those who wish to continue celebrating and honoring the dead, visit the Festival De Las Calaveras (Skulls Festival) presented with (Neo)Muralismos deMN at the Squirrel Haus Arts in Minneapolis from Nov. 5 to Nov. 13.

As a frequent Twitter user, I am disappointed to hear that Elon Musk officially owns the social media platform. He acquired it for $44 billion last Thursday. While this might be important to some, and irrelevant to others, privatizing a company that has been public for long is a big deal. Musk no longer has to disclose Twitter’s performance publicly and they have less regulations. What Musk says will go – pretty much.

It gets a little tricky from here. The New York Times claimed that “at least five top Twitter executives […] have departed the company.” Layoffs are coming too as Musk and his advisers review performance of their employees. A small clash between Musk and writer Stepehen King occurred when King critiqued the idea of paying Twitter to keep the blue verified check mark. Musk plans to charge people $8 a month for Twitter Blue, which is a “monthly subscription that gives the most engaged people on Twitter exclusive access to premium features.”

Although Elon Musk wants to make the platform a “free speech” space for all, with no intervention, the privatization and ultimate control of what goes doesn’t show that.

In other, lighter news. “Avatar: The Way of Water” has its official trailer and it’s awesome. The movie will be released Dec. 16, 2022. Many might recall the first movie that came out in 2009. Yes, you read that right. 14 years ago. However, we’re talking about a film that’s produced with motion capture. Cameron first started working on the film in 1994, which was 15 years before its first release. For those of us who saw “Avatar” in theaters when it was first released, it was a colossal moment in film history.

The sequel is set over a decade after the first film, and we see characters like Neytiri (Zoe Saldana) and Jake Skully (Sam Worthington) come back. The trailer shows stunning images of the characters swimming under the Pandorian waters. The different couples come together as a great big family to fight against the return of Colonel Quaritch (Stephen Lang).

Helene here! I hope everyone had a great Samhain, Halloween, and Dia de los Muertos. I would, however, very much like to bring your attention to some more earthly matters, now that these holidays are done. Like, for example, election day! It’s coming right up. Do you have a plan to vote? You can look up your polling location here! It’s not lost on me that every election is met with a deluge of encouragement to potential voters — so much so that it can seem disingenuous. It is for very good reason, however: voting helps ensure a healthy democracy.

Speaking of the power of voting, I, like many others, was shocked and pleased to see Lula’s win against Bolsonaro in Brazil’s general election on October 30th. I’m not going to try and encapsulate the two men and their politics with so few words, but in the spirit of painting a picture of some of the alliances and beliefs of the two, I’ve included some key points below:

The election between the two was close, and ended with 50.9% of votes going to Lula and 49.1% to Bolsonaro. It took Bolsonaro several days to acknowledge his defeat, although even now he still hasn’t formally conceded. When all the results were in, the World’s leaders flooded social media with congratulations for Lula — and the fair election.

That’s all for this week. We’ll see you next Thursday!

Isabella and Helene, for NewPrensa