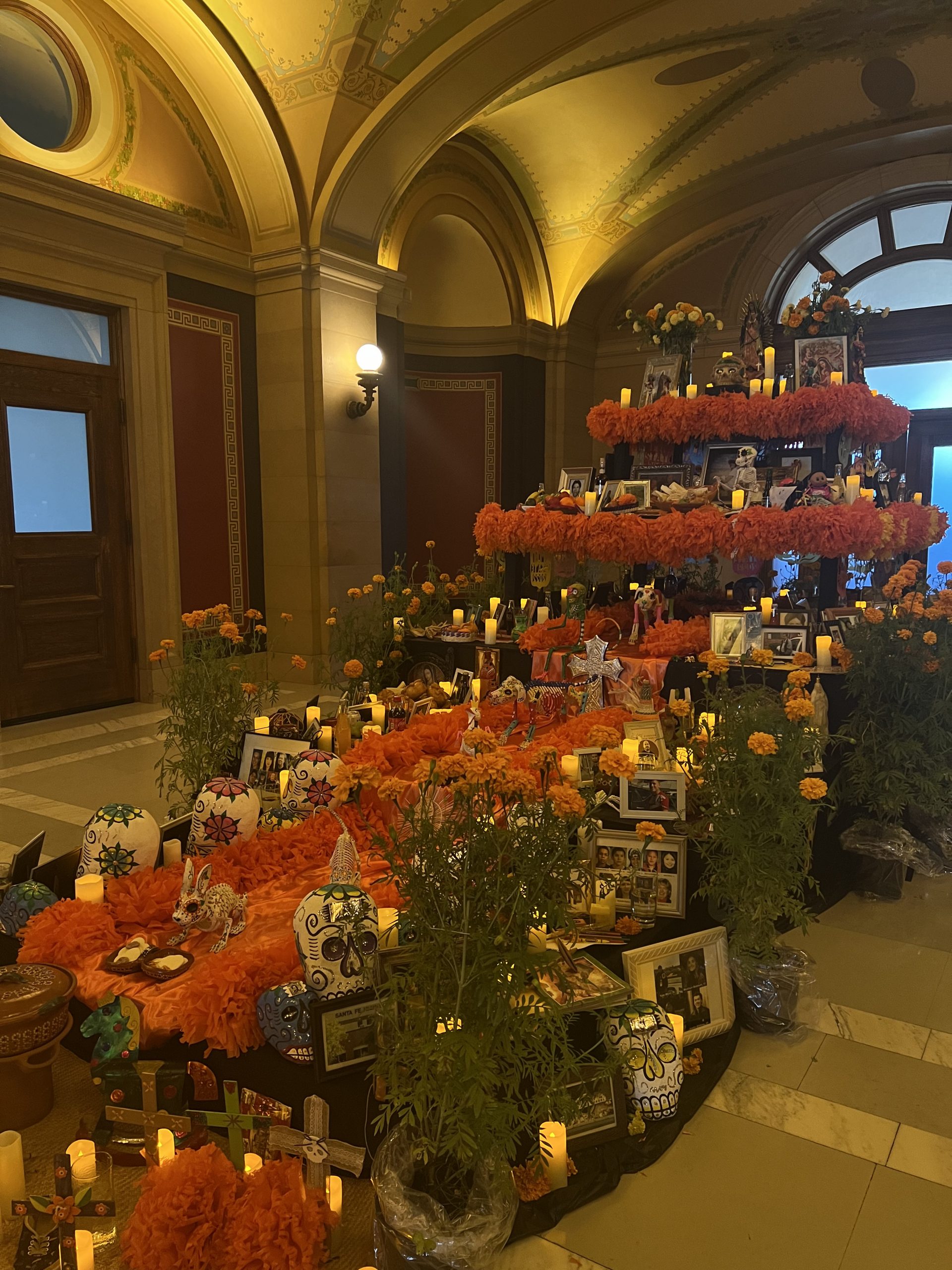 Marigolds are a tangerine color with a hint of gold. Its musky perfume is like no other. They bloom in the summer and the fall, and its Mexican species, Tagetes erecta, grow 4 feet tall. The large flaming orange flowers brighten the rooms of weddings in India, as they light the way for the dead in Mexico.

The Minnesota state capitol is exhibiting their first-ever “Dia de los Muertos” (Day of the Dead) altar  in St. Paul from Nov. 1 to Nov. 13. (Neo)Muralismos de Mexico (NMM) worked together with artist-altarists Monica Vega and Flor Soto, in collaboration with the Minnesota Council of Latino Affairs (MCLA), and other community members.

A press conference was held on Nov. 1 to present Gov. Tim Walz’ proclamation of the altar that would mark Latin-Minnesotan history.

The Day of the Dead altar is a celebration for those who are living. It serves the purpose of remembering the dead but also to remind each other to live our lives to the fullest. The dead are seen as something colorful and beautiful not to be dreaded.

As you make your way into the capitol, across from the rotunda dome, you will find the stunning altar. It is covered in orange tones, photographs, candles, “Pan de Muertos” (bread of the dead), skulls, and Our Lady of Guadalupe sitting at the top.

The marigolds that surrounded the altar came from the Cala Farm in Turtle Lake, Wisconsin, which bloomed 1,000 cempasuchil (marigolds) for the Day of the Dead 2022. The winsome flowers were available for the public to order for their personal celebrations.

The altar also included several colored painted crosses symbolizing the lives lost at the border, and big skulls and small skulls representing the lives of children and staff lost in mass shootings.

Executive-director of NMM, Aaaron Johnson-Ortiz, thanked supporters like the National Museum of Mexican Art in Chicago and the Minnesota Humanity Center through a grant from the Legacy Amendment. As well as the Latino Economic Development Center (LEDC) and Centro Tyrone Guzman provided donations for the project.

“There is rising Mexican and anti-Latino rhetoric coming from politicians and media personalities in the United States and in Minnesota,” said Johnson-Ortiz. “We feel that we need to raise our voices to speak against that and speak up on behalf of our loved ones who have passed on.”

Johnson-Ortiz considered the 750 immigrants who died on the border in 2021 unacceptable. He also raised attention around the shooting in El Paso, Texas, one of the biggest shootings of Mexicans and Latinos in modern American history on Aug. 3, 2019.

“They say that [Emiliano] Zapata lives, so the fight continues,” said Johnson-Ortiz. “For me that means that the dead continue to live as long as we continue to fight.”

Maya Johnson-Ortiz proposed the idea to create a Day of the Dead altar at the state capitol to her brother, Aaron. They wondered why it hadn’t been done before. So, they did it.

“We are as Mexicans and Latinos as we are part of this Country and this culture,” said Johnson-Ortiz. “Our culture is part of it also, so we shouldn’t be segregating ourselves.”

Johnson-Ortiz spoke about the great melting-pot between indigenous and catholic traditions. These have created what we see today on the altar. From the santos, to the tangerine marigolds, to the “Pan de Muertos” (bread of the dead). It all comes together to be as one. “It represents that we are here,” said Johnson-Ortiz.

Monica Vega acknowledged the U.S. as a home that was provided to her, but she never forgets where she comes from. “When you know where you come from, you’ll know where you want to go,” said Vega. People come a long way and lose their culture once they arrive in the U.S.. Celebrations like these are essential to keep their culture close.

She shared her daughter’s excitement for her mother to be presenting at the state capitol. Once she realized how significant this moment was for her and the Latino community, she made sure she’d make the best of it.

Pointing at the pictures of family and friends, she tells each story for an important reason. Vega feels uplifted when people entrust her with carrying on the memory of those who have passed on. There is a beautiful connection and an honor in holding the pictures of their deceased family members.

“I tell people that once a picture arrives in my hands it stays with me,” said Vega. “Year after year, my promise is to continue remembering them.”

Surrounding the altar there is “Papel Picado” (Pecked Paper) that reads “Capitol”. Vega makes these herself. She sees it as her personal touch for a special occasion, like an altar at the State Capitol.

Vega is already planning her future altars. Next year she wants to go bigger. A taller and wider altar. Perhaps a performance to go along with it. She envisions a collaborative altar where people would walk up and place the items themselves.

For over ten years, Vega has paid homage to the deceased as an altarist, a title she’s held that she was not familiar with. Where she comes from, creating altars for the dead is a tradition, not a speciality. Vega speaks proudly and full of emotion about her work and pondered the question of what it means to be an altarist, and whether she truly identified with the title. Nevertheless, Vega commemorates those lost, to keep their memory alive, a privilege she honors.