CLUES in St. Paul freshens up with new mural 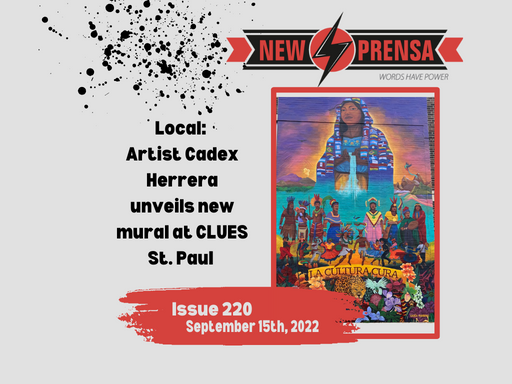 This week’s edition covers the unveiling of CLUES St. Paul’s new mural, the U of M extension program “Nature for New Minnesotans”, the 2022 BIPOC Emmy winners, and singer and songwriter H.E.R.’s selection to play Belle in ABC’s Beauty and the Beast special.

Belizean artist, Cadex Herrera, pays homage to Latin American history with a colorful mural at CLUES on Saturday, in St. Paul. The artist who created the George Floyd mural at Cup Foods, in Minneapolis, brings “awareness and dialogue” to Latino culture. The mural “La Cultura Cura” [Culture Cures] is made on polytab, where the artist had to split it into eight pieces until he put together a 15-foot-wide by 25-foot-high mural. The bottom is filled with each country’s national flower with a jaguar emerging from them, which is an animal that travels from Central America to South America. Herrera’s neighbor said that she had seen him work on the project for over 700 hours. Then, you have the different national dances, and the different indigenous tribes of Latin America, like the Aztecs, the Mayans, or the Incas. At the very top of the mural there is a young girl wrapped in a blue cloth that carries each nation’s flag. “The girl represents Latin American youth,” said Herrera in an interview with NewPrensa. The waterfall’s blue color represents the Mayan Blue, used by the Mayans. “It’s important for all of us to keep ourselves conscious in this country, for our kids, for our neighbors. It’s something that we should be very proud of,” said Herrera. “It represents Latino culture and history through our traditions.”

Nature for New Minnesotans, a University of Minnesota Extension program, is helping new immigrants to Minnesota immerse themselves in the outdoors while bettering their English. The pilot program launched in 2021, and so far has served around 25 people through English learning programs with Literacy Minnesota and Our Saviour’s Community Services in the Twin Cities. Lucas Rapisarda, a conservation science Ph.D. student who is leading Nature for New Minnesotans, is working to design a system that incentivizes participation while remaining accessible and sustainable. This means not only offering one-off experiences but equipping participants with the skills and tools to pursue these new hobbies themselves.

The 74th Primetime Emmy Awards wrapped up this past week on Monday. Of the 25 categories for the Emmy Awards, 7 awards went to people of color and the other 18 went to white actors and behind-the-scenes contributors. Of the 7 non-white winners, 4 awards went to those with behind-the-scenes involvement. The three others, who won awards for their acting, were Zendaya with Euphoria, Lizzo with Lizzo’s Watch Out For The Big Grrrls, and Lee Jung-Jae with Squid Game. The Emmys are historically very white, and while 2022 saw more POC representation in its winners than 2021 (a year where no POC actors won), POC still represented the minority of winners. Even with history being made as ,Zendaya becomes the youngest woman to ever win two Emmys, the ceremony has a long way to go if it wants to truly recognize and celebrate diverse talent.

Singer and songwriter H.E.R. is chosen to play Beauty and the Beast’s Belle for ABC’s new hybrid special. The Black-Filipino artist will be working with directors Hamish Hamilton, director for previous Grammy and Emmy Award shows, and Jon M. Chu, the director of Crazy Rich Asians. Recently, Disney debuted The Little Mermaid’s teaser trailer with singer-actress, Halle Bailey, as Ariel. “You don’t understand what this is doing for us, for our community, for all the little Black and brown girls who are going to see themselves in you,” said Bailey for Variety. From a Disney princess cartoon like Tiana in Princess in the Frog to having two live actions with Black women in the leading roles. The Beauty and the Beast special will air Thursday, Dec. 15, at 8 p.m. ET, and will be available on Disney+ on Dec. 16. H.E.R. is looking forward to embodying a Disney princess, as well as working on the upcoming Broadway musical version of The Color Purple.

Bottom of the news:

Barbie has launched its new Dia De Muertos Barbie doll designed by Mexican American Barbie designer, Javier Meabe, in collaboration with Mexican fashion designer, Benito Santos. Inspired by vibrant colors and artwork, Meabe introduced in this year’s Barbie “embroidery and pigment print artwork.” The Barbie inspired by Santos “wears black charro-inspired attire,” a Mexican horseman or cowboy, with more embroidery and a cropped bolero jacket! The collection launched Sep. 8, 2022, with the Santos doll sold out while the others are still available on their website.