Is Weed Legal in Minnesota? 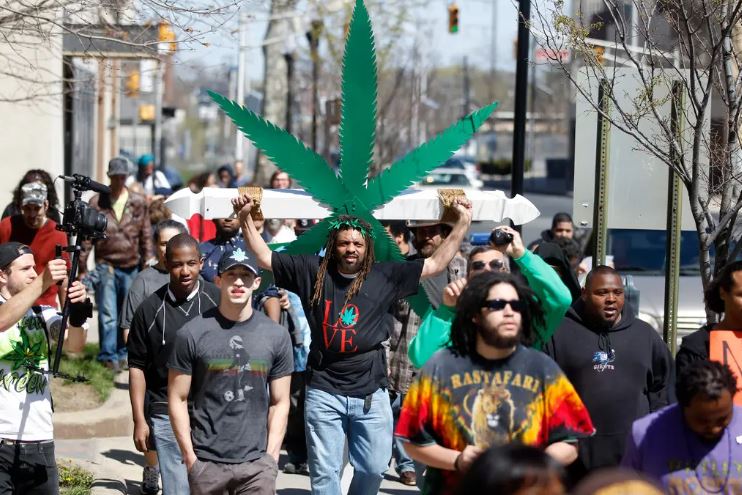 We’re talking about the (possibly accidental) legalization of weed in Minnesota, where Title IX falls short, an initiative started to reconnect communities destroyed by highways, and a visit to Highland Park, IL by VP Kamala Harris.

As of earlier this month, Minnesotans (age 21 or older) can now purchase and consume food and beverages with hemp-derived THC. What does that mean? Marijuana and hemp come from the same cannabis plant, but the main difference lies in how much THC (tetrahydrocannabinol) is in the plant. Marijuana is high in THC (the chemical that gets people high), and hemp is (relatively) low in THC.

This law is a big step towards the legalization of recreational marijuana use. However, since the law was put into effect, some republican lawmakers have come out to say that this was done “sneakily” by democrats. Or they have said that they were “surprised” to hear that this law did, in some capacity, legalize weed.

Republican Sen. Jim Abler asked (after the law was adopted by voice vote), “That doesn’t legalize marijuana?… We didn’t just do that, did we?”

These comments are frustrating to hear to Democrat lawmakers and all Minnesotans alike that GOP lawmakers potentially voted for something they didn’t understand. “Either he was not paying a lot of attention or asking very good questions, or he knew and just doesn’t want to have his fingerprints on it,” said Democratic House Majority Leader Ryan Winkler. “I’m not sure which is the case.”

Not only are we not sure which is the case, but it begs the question, is either option better than the other?

Although some may be worried about the safety of this legalization, it should be known that no sellers or manufacturers can market the edibles to kids or package the products to look like they are meant for kids, and all packages must be child-proof.

Title IX surpassed its 50th anniversary this past month. The law states that no one should be discriminated against based on sex for any educational program or activity receiving Federal financial assistance. Title IX is most commonly spoken about regarding girls and women in sports. While the law did great things for some, there are still barriers that the law does not break. BIPOC women and girls are underrepresented in sports as athletes, coaches, and athletic directors. The Tucker Center for Research on Girls & Women in Sport at the University of Minnesota releases a report card each year that grades colleges and conferences on how well they employ women and people of color.

This report is an expansion of the work from The Institute for Diversity and Ethics in Sport (TIDES), which releases a racial and gender report card relating to coaches and athletes in college and professional sports. TIDES found that through all divisions of college sports (D1, D2, and D3), 69.4% of female student-athletes are White, 9.1% are Black, 6.2% are Hispanic or Latinx, 2.4% are Asian, 0.3% are Native Hawaiian or Pacific Islander, and 0.4% are Native American.The way to ensure female athletes of color make up more of the student-athlete demographic is to have better representation in coaching staffs. At the University of Minnesota, only 7.1% of coaches of women’s teams are a person of color. Until there is a conscious decision to hire and retain female BIPOC coaches at all levels of sport, there will continue to be a gap in participation from female BIPOC athletes.

The creation of the interstate highway system in the 1950s was responsible for destroying many predominantly black neighborhoods. U.S. Transportation SecretaryPete Buttigieg is helping to launch a pilot program called “Reconnecting Communities,” where one billion dollars will be available to cities and states over the span of five years to help implement means of reconnecting these communities, such as pedestrian bridges, green spaces, or the partial removal of highways. This movement is already underway in Minnesota, where the “Rethinking I-94” MnDOT project is entering its second phase. I-94, built in the 1960s, divided neighborhoods and displaced residents in the Rondo neighborhood of St. Paul. Uplifting community voices to inform the actions of transportation agencies is the only way to create equitable solutions to racially unjust roadways.

Vice President Kamala Harris called for an assault weapons ban during her visit with Highland Park Mayor Nancy Rotering at the site of the July 4th shooting. Mayor Rotering has long fought for assault weapon bans in her community, asserting that military-style weapons do not need to be in the hands of the public. Harris’s speech given on the site of the shooting has been criticized for its repetition, contributing to the disenfranchisement that many Americans already feel surrounding the politics of gun regulation. The Biden administration is pushing for tighter gun regulations, with Biden having already signed new gun violence measures into law following the Uvalde shooting in late May.

Ada Limón is named the 24th US poet laureate. She is only the second Latino to be named as the national poet laureate, the first of whom is Juan Felipe Herrera who held the title from 2015-2017. Limón views her nomination as especially significant in this divided moment in U.S. history, understanding that poetry serves as a way to experience the whole of human emotion.

Hi, friend. Maria and Helene, here!
We’re communications specialists at NewPublica by day and masters of meal prepping by night!